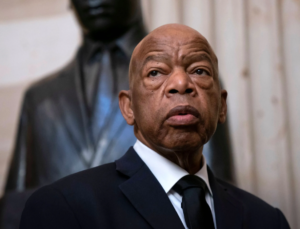 February is Black History Month. In August of 1963 on the steps of the Lincoln Memorial where Dr. King gave his “I have a dream” speech, there were actually six speeches given that day. One was delivered by 23-year old John Lewis, a civil rights activist who had been beaten and jailed for marching for the right to vote. In 2012 I had the privilege of delivering a presentation to the House Democratic Caucus at the invitation of Speaker Nancy Pelosi.

Sitting behind Speaker Pelosi was Congressman John Lewis of Georgia. It was an honor to meet Congressman Lewis, a great American and civil rights leader.

About the Author: Eugene A. Guilford, Jr., CAE